When Leith-born lace maker’s son and Oxford educated musician Dr John Greig brought out his ‘Scots Minstrelsie’ in the 1890s – a 6-volume collection of Scottish song – he aspired to make a permanent monument to his beloved native music. Yet, in his own life, enduring fame evaded him. Passed over for a permanent post – a professorship – in his native capital, he left for London and faded into musical obscurity. The Scottish doctor of music’s story is a sad one, but popular with his students, playful in humour and highly thought of by colleagues and critics, his fine Scots song legacy can still inspire today.

Admirers of Scots song, at home and furth of Caledonia, had cause to celebrate in 1893 when Dr John Greig, the first Scotsman ever to take a doctoral degree in music at Oxford, published the first volumes of a work he hoped would stand as a ‘national monument of Scottish song’.

This was his Scots Minstrelsie, a handsomely bound 6-volume ‘compendium’ edited and arranged with copious notes by Greig himself for the Messrs TC & EC Jack, an Edinburgh publishing firm who had sensed big opportunities in the folksong market. Completed in 1895, it contained over 500 songs: some ‘ancient’ and fondly treasured, some rescued from oblivion and others new, composed with airs of Greig’s own devising. The distinguishing feature of this ‘noble heritage’ of song, as Greig celebrated it, was not the fact of the collection itself – there were many others – but Greig’s skillful piano arrangements: unfussy and carefully conventional in harmony, yet full of rhythmic invention and colour. Greig had a particular facility for intricate harmonic texture and beautifully expressive ornament in his melodic writing.

From his ‘Scots Minstrelsie’, Greig’s fine arrangement of ‘Lord Gregory’ as refashioned by Robert Burns from ballad tradition.

From coach lace to counterpoint

Perhaps it is no surprise Greig had an eye, and ear, for the inner life of harmony – the colourful counterpoint of thread against musical thread. Born in Leith in 1854, the son of James Greig, printer, who later became sole partner of the firm of J&J Greig Coach Lace Manufacturers, Edinburgh, and Jane Donaldson, daughter of a Glasgow weaving loom reed maker, careful attention to fine detail was in his blood.

Educated at the University of Edinburgh, where he took a Masters degree which enabled him to teach for a time at Leith High School, he went on to become a Fellow of the College of Organists, later taking a doctoral degree in Music at Oxford – a major achievement for a man of his means and background.

Throughout his student studies and career in Edinburgh – when the family had flitted a little way from Leith – Greig was able to live with his parents and siblings at a comfortable New Town residence in the city’s Scotland Street – not too far from number ‘44’ of contemporary literary fame!

There, he established himself as a ‘teacher of music’ and to supplement his income took up an appointment as organist and choirmaster at St Cuthbert’s Free Church, Spittal St, in the shadow of Edinburgh Castle. The minister there was Sir Henry W Moncreiff, a leading figure in the Free Kirk who had taken part in the Disruption of 1843 – in which several hundred men of the cloth had given up their homes and livings in protest at the right of patronage of, ultimately, the British State to appoint who it liked to the pulpit of a Scottish parish! These were stern and principled Scotsmen who would thole no affront to their national Kirk’s historical independence and their influence on the tenor of Scottish religious and civil life in Greig’s day was one of immense significance.

Man of mischief and fun

Their stern ways, if you hadn’t a mind to engage too deeply in the Kirk’s schism and strife, could, in turn, be hard to thole. But Greig, full of fun and mischief, found humour a happy way to deal with it. Writing from the family home, in 1894, to Alan Reid, a musical ‘lad o pairts’ and emerging song editor who had come from Angus to become choirmaster at Barclay Free Church (now Church of Scotland) on Brunstfield Links, he suggested: ‘Instead of my calling at Leamington Terrace on Sunday evening… come down to Scotland Street’.

‘You see (this comes perilously near to one of these New Year jokes again) there are so many Free Kirk elders on the prowl between the Barclay Kirk and Leamington Terrace on the Sunday nights, that if I were to commence to touch your piano to some lively patter song… two or three of these clerically hated Men (with the capital M) would be sure to be drawn to No.36 of the aforesaid terrace, bent on unearthing Babylon and the Beast with the Seven Horns. Then there would be a fine turn-up! ‘Cess and Press and Presbytrie’ – Whew! And a sermon on the Seven Deadly Sins, particularly the Abomination of Stage Plays. – Come on, Mr Reid, down to Scotland Street and no be mixed up wi’ sic terrible backslidin’… and if Elder Macnab should bother us’ (Elder Macnab was Free Kirk ‘Meenister MacGlucky’s’ sidekick in the satirical magazine Punch)… ‘we’ll just fill him fu’ and threaten him wi’ a’ the pains an’ penalties before the Session with whilk he threatened us. Yours [sketch of a figure on a hangman’s noose!] John Greig’.

Greig, cowering at the organ console of Free St Cuthbert’s, certainly seems to have soaked up a sermon or two by the great ‘Man’ Moncreiff. But a more productive outlet for his musical skills and happy personality was to be found, for a time at least, at the University.

Passed over for a professorship

In 1891, when in his late thirties, John Greig was appointed interim Professor of Music at the University of Edinburgh. This came on the resignation of the ailing Sir Herbert Oakeley, English composer and ‘Reid Professor of Music’ who had rejoiced in the moniker ‘Composer of Music to Queen Victoria in Scotland’.

Although popular with the students and an ‘extremely gifted man’ with a portfolio of successful compositions, including an ‘exquisitely graceful’ orchestral suite The Three Graces, Greig was passed over as candidate for the Reid Professorship in favour of the Düsseldorf-born musician and scholar Frederick Niecks. According to respected music historian, Henry Farmer, the musical establishment ‘sniffed’ at the idea of a Scotsman in the post, even though that Scotsman was the first ever to gain a doctoral degree in music at Oxford. To be fair, Niecks – a native German speaker and published authority on Chopin, who had come to Scotland as a young man, played viola in the Edinburgh Quartet of Scottish composer Alexander Mackenzie, extended his education in Leipzig and become an expert on Schumann – was an obvious choice for his links to the European Continent. Master tradesman’s son Greig, for all his skills, had not the private means to compete with that.

All the same, why was Greig’s candidacy – his submission papers boast glowing references – rejected? Was he, not so much insufficiently Germanic in his training as, just too Scottish? Englishman Oakeley, the privileged gentleman son of an archdeacon, had brought his ‘polished rapier’ to fight the corner for classical music in the city and introduced continental composers to sometimes unwilling auditors, such as the great man of Greek letters, Professor John Stuart Blackie, who, though Berlin-educated, thought the Scottish song settings of Saxon composer Robert Schumann mere ‘foreign ariettes’ and the taste for them mere ‘West-end flunkeyism’!

But who could blame Blackie for this outburst, when within Scotland’s universities, the prevailing idea was that Scottish musical taste wanted refining and elevating. An unhelpful notion which encouraged myopic defensiveness of Scottish culture on the one hand and profession of the Scottish ‘cringe’ on the other. At St Andrews University, the Principal there had thanked Greig’s predecessor, Oakeley, for ‘awakening the musical sense within us, expanding our conception of its range, and elevating its tone’ adding that ‘the somewhat too stern stuff we Scots are made of needs this benign influence to soften, sweeten and refine us’. But it was a false comparison. The true course for ‘national’ music, as composer Edvard Grieg was then gloriously showing the world from Norway, was a canny course somewhere in between – not a battle with, but an embracing of the best traditions in European art music: a nourishing of native flower on cosmopolitan soil.

Turned down for the Reid Professorship, and stung perhaps by the lukewarm reception of his opera on Scottish historical theme, Holyrood, Greig, in 1898 left his native haunts for London, where he became organist of the Scottish National Church at Crown Court in Covent Garden. His departure was lamented in the Scottish Musical Monthly with the observation that ‘it was a pity London should swallow up our best men’.

London indeed ‘swallowed’ him up, and though Greig was there briefly noticed as an ‘able and ingenious musician’ – the composer of a Melologue, a melodrama with speech and song in the vein of French composer Hector Berlioz – his memory faded in Scotland.

In 1909, quite without warning, Greig dropped down dead. He had been watching a performance at a White City ‘Imperial International Exhibition’ in London, and fallen at the feet of fellow audience members. His passing was sudden, and such obituary as there was in the Scotsman newspaper of his native capital, was concerned more with the circumstances of his death than the musical legacy of its forgotten son. ‘Greatly loved’ and of ‘remarkably happy disposition’ in his life, Greig was laid to rest in London, utterly uncelebrated. What became of his papers and music manuscripts, and what we should make of his cultural legacy overall, are questions – important ones – for future scholars of Scotland’s music.

From his ‘Scots Minstrelsie’, Greig’s touching and delicate arrangement of ‘Farewell to Ayrshire’, a song about, but not – as was originally thought – by Robert Burns.

More than a ‘monument’

Like so many others – and with mixed success – Dr John Greig tried to assert his Scottish culture and identity within the machinery of an all-consuming Victorian British Empire. That he left for London, was both a loss for Scotland, and a personal loss for Greig whose professional skills and distinctive musical personality never again found a wide platform.

But in this Scott 250 anniversary year, when we celebrate another ‘Minstrelsy’ and another ‘monument’ to Scotland’s ‘noble’ lyric heritage – Walter Scott’s Minstrelsy of the Scottish Border (1802) – we might turn afresh the pages of John Greig’s Scots Minstrelsie and pause to celebrate the Scottish doctor of music’s musical achievement anew. For Greig has bequeathed us not so much a ‘monument’, as a treasure of finely- and lovingly-wrought Scots song arrangements, ostensibly written for domestic consumption, but in many a case – as simple art songs in miniature – entirely worthy of the concert platform and of thoughtful, sympathetic interpretation. 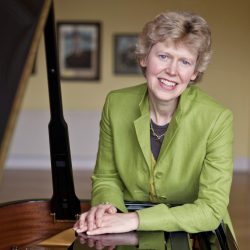 Dr Sally Garden writes with singer’s ear and scholar’s eye about the music of Scotland and Scandinavia. She writes to encourage understanding and curiousity about the repertoire – so often rare – she has cultivated through the years on the concert platform.

This article is a work of public scholarship, intended for a wide audience. For full version (with notes and references) please contact the author at www.monsgraupius.org